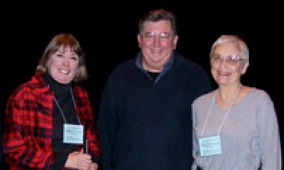 2009 KTA winners
Father Aidan, a Benedictine monk, is wandering in a spiritual desert when the new Abbot assigns him a junior monk who was asked to leave the Abbey of Gethsemani for unknown reasons. The only clue in his personnel file is about a remarkable gift: his voice. When Aidan discovers Brother John Mark’s extraordinary voice, a tenor the likes of which neither Aidan nor anyone else at the abbey has ever heard, Aidan begins to fall in love—with John Mark’s voice.
Brother John Mark is tormented by the sin of pride in his voice, and no one understands how deep his pain is until Aidan discovers that John Mark had attempted suicide at Gethsemani. In a final attempt to scourge his demons John Mark goes under a vow of silence, and Aidan confesses to a sin for which he cannot find redemption without John Mark’s help.