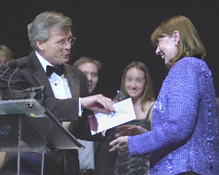 Int'l Mystery Writers Festival
--Voices of Experience, a playwriting and performance workshop for seniors sponsored by the Kentucky Arts Council, was held at Pioneer Playhouse in July and August. I co-taught with Holly Hepp-Galvan, a playwright and teacher from New York City.

--The Playwriting Workshop at Northpoint Prison continues with great success. One of our students this year received first prize in the national prisoner playwriting contest of the American PEN Center. Once again we welcomed outsiders to the fourth annual Voices Inside staged readings of prisoners' plays in August.

--Pioneer Playhouse had the world premier of The Search for Tinker Doyle in July of 2013. The comedy-drama featured guest actor Kieran Cunningham, direct from Ireland, and was the centerpiece for the Danville Irish Festival.

--The Little Theatre of Crittenden County in West Memphis, Arkansas, will present High Strangeness this October 19-21. Directed by Arthur Rust, this is the first trip out of Kentucky for the women of High Strangeness.

--Jerry Peavler and the Great Debate, the third and final chapter in the Hollerwood trilogy, opens the West T. Hill Community Theatre in Danville on September 21, 2012, and runs for three weekends. Find out what happens to the folks of Random, Ky., when a vice-presidential candidate comes to town to debate the citizenry. Then there's the funeral and the fireworks and the wedding...

--My 10-minute play The Santa Claus Discipline will be part of an evening of staged readings presented by the Kentucky Playwrights Workshop at the Berea Arts Council in Berea, Ky. The readings will be held September 8, 2012, in Berea.

--An evening of staged readings of 10-minute plays written by prisoners at Northpoint Training Center, a medium-security prison, will be held Monday, August 13, 2012, at the prison chapel. This culminates the third successful year of the playwriting program funded by an NEA grant.

--The UFO-abduction comedy-drama High Strangeness opened at Pioneer Playhouse in Danville, Ky., on July 24 and will run through August 4, 2012. Come see this story inspired by an actual incident from 1976. Tickets still available at1-866-597-5297. Make a night of it and come for dinner!

--Hollerwood 2, another comedy about the folks of Random, Kentucky, will receive its world premiere at West T. Hill Community Theatre in Danville beginning September 23, 2011, and running for three weekends.

--For the second year in a row, the NEA has awarded Pioneer Playhouse a grant to produce a play and conduct playwriting classes for inmates at the Northpoint Training Center, a medium-security prison near Danville. Liz will continue to work with the prisoners from last year's classes and develop more opportunities for their work.

--The Eudora Welty New Play Series awarded High Strangeness third place (out of 215 entries) in its 2011competition. The play received a staged reading in Jackson, Mississippi, in May 2011.

--The Mantua-Maker, a one-act play about Mary Todd Lincoln and her dressmaker, won second place in the Kernodle Playwriting Competition at the University of Arkansas in the fall of 2010.

--High Strangeness, a comedy/drama about three women who claim to have been abducted by a UFO, opened the 31st season at West T. Hill Community Theatre in Danville, Kentucky.

—Under an NEA grant, Pioneer Playhouse presented The Dillinger Dilemma to inmates at Northpoint state prison in July. Playwriting and acting classes followed, the latter led by Shakespeare Behind Bars founder Curt Toftelund.

—Virginia's Barter Theatre Appalachian Festival of Plays and Playwrights presented a staged reading of The Spring Cleaning for its 2010 festival July 27-August 7.

—The new comedy The Dillinger Dilemma had its world premiere at Pioneer Playhouse in Danville, Kentucky, July 13-24, 2010. Despite the heat and humidity, attendance records were set in the theatre's 61st season.

—January-April 2010 was spent on a residency fellowship with the Helene Wurlitzer Foundation in Taos, New Mexico.

--The Spring Cleaning, a drama about a coal-mining family in Kentucky during the Depression, was a Finalist at the Southern Appalachian Repertory Theatre (SART) playwriting competition in Mars Hill, North Carolina, in January 2010.

--A drama about Benedictine monks, Aidan’s Gift, won the Kentucky Theatre Association’s playwriting competition in November 2009. It was also a runner-up in the Heckart competition at Ohio State and a finalist in the Saints and Sinners contest in New Orleans.