THE HOLLERWOOD TRILOGY: Hollerwood, I Got You Babe, Jerry Peavler and the Great Debate 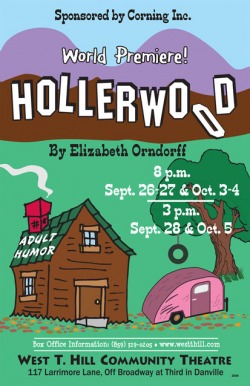 When Dr. H. Jonathan Keller, a professor of creative writing from the University in the big city, arrives at the Random House Writers’ Conference—his appearance destined to be a big career boost—he has no clue what is about to befall him. The “conference” is put on by Babe Dean and her family at her house cum store in Random, Kentucky.
From Dean’s Drop Buy and Shope, Babe broadcasts messages to prisoners at the Career Development Center, applies for economic development grants, and manufactures fake folk art. She is an entrepreneur of the highest order. And she is not above getting personally involved in the professor’s love life, or in the lives of her ex-husband Lance, her pregnant daughter Hinky, or her daughter’s boyfriend, Jerry, who lives in his truck in her front yard.
Before the conference is over, the professor has become a celebrity due to suddenly having ‘the cancer;’ Babe has slept with almost every man in Random; a wedding is called off when Hinky and Jerry find out they share the same father, Lance, aka Homer Garfield; and Melinda, the professor’s graduate assistant, dons the world ugliest wedding dress to marry her love, Dr. Keller, in a true shotgun wedding.
Runner-Up, Southeastern Theatre Conference Getchell Award, 2007

When Babe Dean becomes mayor of Random, Kentucky, after Mayor Harvey Snow runs off with the manager of the Huddle House, she wastes no time whipping Random into shape. After a fracas at City Hall, she appoints her own City Council, names Jerry Peavler the police chief, and goes head-to-head with itinerant preacher and troublemaker Wilbur Winters, who has come to Random to picket the parade welcoming home the National Guard.Then there's the budding romance between Bertie Snow and Fred WIlliams, owner of the plumbing supply store. Through it all, Babe continues her daily broadcasts to the boys in prison. Oh, and then her daughter Hinky, Jerry Peavler's former fiancee and half-sister, shows up with the baby.  Just another typical week in Random, Kentucky.

Things are humming along in Random, Kentucky, when Babe gets a great idea for a new business: shoot peoples' cremains up in glorious fireworks. Always thinking, Babe comes up with another bright idea to put Random on the map: invite the presidential candidates who are coming to have a debate in a nearby city to stop off in Random--the real America--to debate each other at city hall. When only one of the candidates manages to find his way to Random, along with his prissy media assistant, Jerry orchestrates a debate in which the senator from Washington must debate the good people of Random. Babe almost misses the festivities because of her bunionectomy, but she arrives in time--and on painkillers to boot--to find out that who Jerry Peavler thought was his father, is not.And that the democratic process is just fine, thank you, as long as you got fireworks.